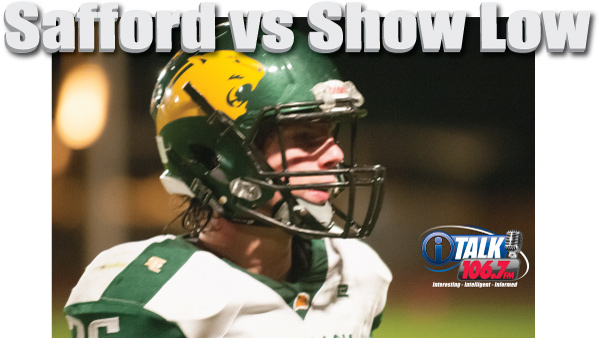 The 0-3 Safford Bulldogs make the trip to Show Low to take on the 1-3 Cougars.  Watch the Full Game by clicking the image below:

The Bulldogs may be the best 0-3 team in 3A football this year.  Under the direction of new Head Coach Eric Hjalmarson, they have been improving from week to week and last week almost upset their cross-town rivals the Thatcher Eagles.

In the end they lost by a touchdown 28-20.  Show Low played Thatcher the week prior, and got run over by the Eagles’ offense, losing 60-6, so the Cougars will have to step things up this week and bring their A-game if they don’t want to be run over by the Bulldogs.

The Cougars have the athletes to compete, but will need a big performance from their defense to stay in this game.  The Bulldogs, who run the “Wing T” offense that was successful during the Paul Morro era at Blue Ridge High School, have added a successful passing game since their first loss of the year against Snowflake.  Two Weeks ago Quarterback Mason Duros threw for over 400 yards and 5 touchdowns in their overtime loss to Wickenburg 48-47.

The Cougars will also need a break-out game from their offense tonight.  Safford boasts a tough defensive front that will not be friendly to the run.  That will put pressure on Junior Quarterback Colton McGinnis, who has gone 31 of 55 for 391 yards passing, and 4 touchdowns so far this year, but has also thrown 8 interceptions.  Eliminating turnovers will be a big key to the Cougars’ success tonight.