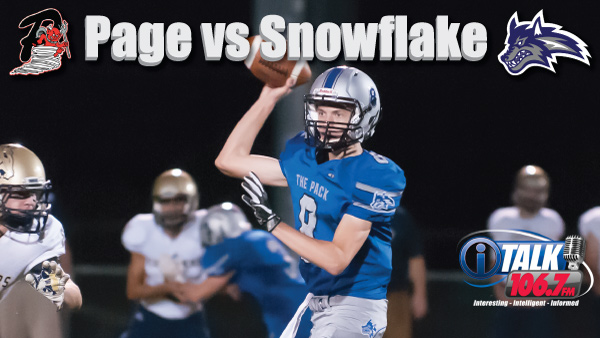 The undefeated Sand Devils (3-0) of Page High School put their unblemished record on the line as they blow into Snowflake to take on the (2-1) Lobos. Watch the full game by clicking the image below:

Despite a 2-1 record the Lobos are considered by most as a top-ten team in 3A, but will have to have a solid performance to beat the Sand Devils. The Sand Devils appear to be true contenders this year with dominating wins over Payson and Florence to start the season and a big win over Winslow last week.

The common opponent between Snowflake and Page is Florence, and if that game is the indicator, Page is favored to win tonight’s contest. Page beat Florence 46-12 and Snowflake struggled in the first half against the Gophers. They were tied at halftime 14-14, but Snowflake pulled away in the second half to secure the 20-point victory. It’s important to point out that Snowflake was without their top Running Back and Linebacker David Brimhall, who was sidelined last week with an injury. Brimhall will be back in the lineup tonight and this game promises, at least on paper, to be interesting from start to finish.