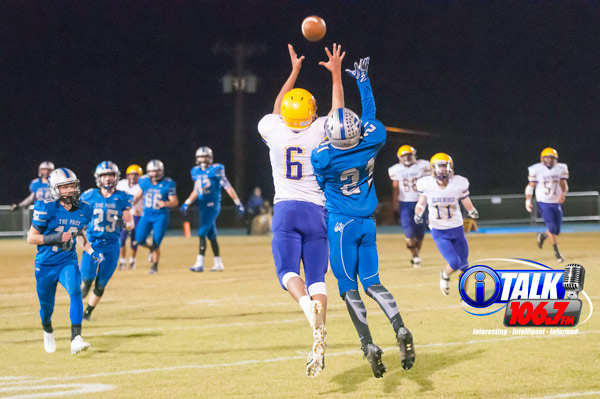 The #5 ranked Lobos of Snowflake High School travel to Blue Ridge to take on the #15 ranked Yellowjackets.  Watch the game by clicking the image below:

The Lobos (whose only loss was to Ben Franklin in the second week of the season) come into this game heavily favored with a 4-1 record, but will need to stay focused so as to not overlook the 3-3 Yellowjackets.

The Yellowjackets have been improving week to week and have shown the grit and determination that was a hallmark of their success during the Paul Moro era.  They are lead by Senior Running Back Chase Esparza who is averaging 133 yards per game and has 8 touchdowns on the season, and Sophomore Quarterback PJ London who is 45 of 78 for 692 yards and 5 touchdowns passing this year.  His primary targets are Corey Endfield who has 15 catches for 256 yards and 2 touchdowns, Dominic Hoffmeyer (12 – 200 – 1 TD), and Tanner McCullough (10-109-1 TD).

To have any chance at winning, the Jackets will have to overcome Snowflake’s swarming defense that boast some of the top athletes in 3A this year. Their task on defense is equally daunting. The Lobos have multiple weapons to choose from on offense.  They enjoy extraordinary depth at the Running Back position including David Brimhall (30-236 and 2 TD’s) who is averaging 8 yards per carry, Brigden Turley (63-261 and 3 TD’s) who leads the team in total rushing yards, and Cody Fox (33-155 and 7 TD’s) who leads the team in rushing Touchdowns.

The Lobos as a team are faster then the Yellowjackets, so containing the running game at the line of scrimmage will be critical. Lobo’s QB Ethan Ramage, who is 74 of 113 for 911 yards and 5 TD’s this season, is not only very accurate (66%), but very good at extending plays. His favorite targets are Sam Ruehle (18 – 319 – 1 TD), Brigden Turley (13 – 162 – 3 TD’s), and Luke Patterson (19 – 144 – 1 TD).  Expect the Jackets to mix things up defensively to try and disrupt the passing game. If the Jackets allow the Lobos to get into the open field it could be a long night for Blue Ridge fans.

The one chink in the snowflake armor that Blue Ridge might be able to exploit is turnovers; they are averaging 2 per game and have been quite fortunate to only have 10 on the season.  They have fumbled the ball 11 times, but have recovered all but 3.