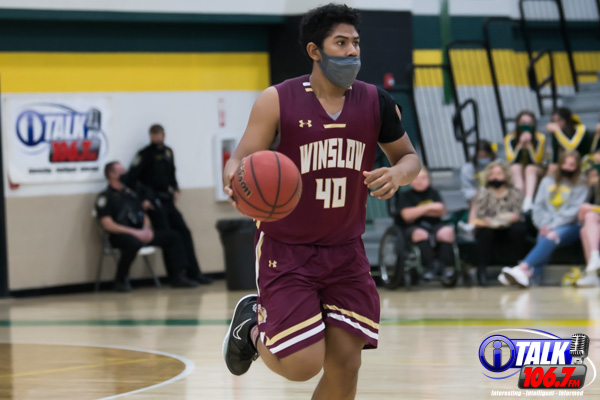 Winslow's #40 Dustin Richard brings the ball up the floor during their game against Show Low. Richard had 20 points and 10 Rebounds in the 66-55 win.

Click the images below to watch Snowflake vs Winslow Girls and Boys Varsity Basketball Games:
Tonight’s boys varsity game features the undefeated Lobos of Snowflake High School who travel to Winslow to take on the Bulldogs. The Bulldogs will try to avenge their only loss on the season. The last time these two teams met it was at Snowflake and the Bulldogs lost 79-70, but they were without one of their top scorers and rebounders, Dustin Richard who was sidelined with a shoulder injury. Richard has been lights out since his return scoring Two Double Doubles in his first two games back. He scored 20 points and 10 rebounds against Show Low and 20 points and 12 rebounds against rival Holbrook. Tonight will be the toughest challenge of the season for the Snowflake lobos as #2 Snowflake takes on #3 Winslow.