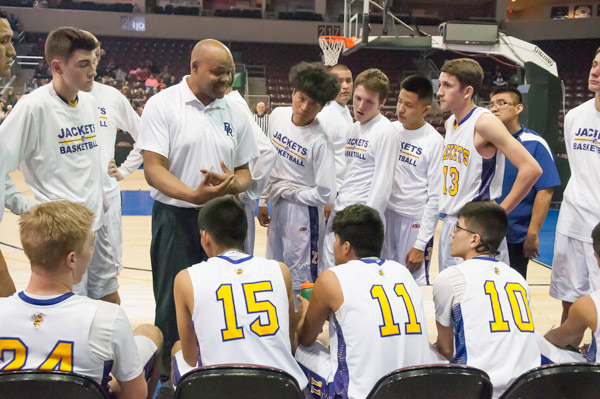 The Lady Bulldogs of Winslow High School travel to Blue Ridge to take on the Yellowjackets. Watch the Girls game by clicking the image below. Scroll down to find the Boys game.

The last time these two teams met it was a lopsided affair to say the least.  The Yellowjackets, despite being down only two points at the end of the first quarter, were outscored 26 – 11 in the second and 23-2 in the third.  Needless to say the Bulldogs smashed the Yellowjackets at home 73-34.

The Jackets have shown some improvements since that last game and are desperate for win. They need to climb at least 2 spots in the 3A Conference rankings to have a chance to make the 24 team State Tournament.

The Bulldogs are in the hunt for a Region title and are sure to be aware that this could be a trap game for them. They had a chance to secure the #1 spot on Tuesday but, suffered a road loss to Holbrook 40-35. The first time they played Holbrook at home and won by 11. Despite having identical region records Winslow finds themselves in second place in the region now having lost 1 more conference game then the Roadrunners. The Bulldogs will need to win the rest of there games and hope for a miscue by the Roadrunners to get a chance at the title this year.

The first place Winslow Bulldogs travel to Blue Ridge to take on the Yellowjackets for what could be the 3A East Region Championship. Click the image bellow to watch this game:

While both teams have 2 more games after this one, their region records are identical. They each have only 1 region loss, but Blue Ridge’s loss was to Winslow. Winslow’s loss was to Show Low. Assuming both teams win the rest of their games, the team that wins tonight will be the 3A East Region Champion.

The last time these teams met it was in Winslow on Jan. 15th. It was a back and forth battle that was close throughout. Tied at 19 at the end of the first Quarter the Bulldogs took a 4 point lead with them into to the halftime. The Jackets outscored the Bulldogs in the 3rd 24-22, but found themselves down by two going into the final quarter where Winslow capitilized on some Blue Ridge mistakes and pulled away to the 75-69 win.

It wouldn’t be wise to bet against either of these teams tonight. They are both explosive and feature suffocating defenses. The difference may very well rely on who knocks down the most 3’s.

Regardless of who wins, this one is sure to be an instant classic.