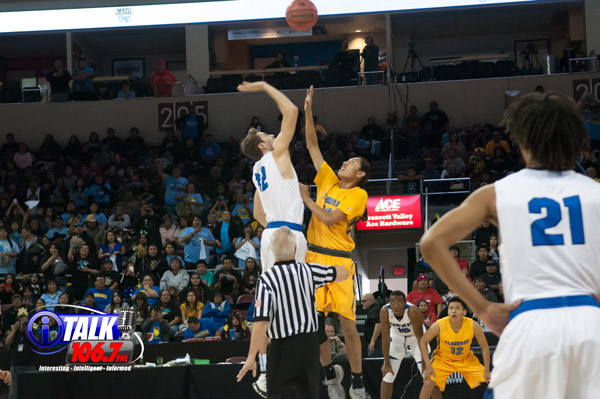 6'3 Harley Upton of Alchesay jumps against 6'8 Jared Perry of Paradise Honors to start the 2A State Semifinals at the Prescott Valley Events Center. The Falcons upset PH 67-61.

It was a David and Goliath story at the Prescott Valley Events Center today as the #3 Alchesay Falcons took on the #2 Panthers of Paradise Honors High School today.  The Panthers featured a back court who’s shortest player was their 6 foot point guard.  Their wings were 6’2 and 6’4 and their leading scorer was a 6’8 giant who came into the game averaging over 14 points per game, but the Falcons who’s tallest player is their 6’3 Senior Forward Harley Upton didn’t seam to be fazed by the size or the speed of the Panthers.  Alchesay’s Head Coach Kyle Goklish had a solid game plan from the beginning that included a monster task given to 6′ junior guard Kellen Parrish to shut down the 6’8 Senior points per game leader of the Panthers Jared Perry.  Parrish was up to the task holding Perry to just 2 first half points and 6 points total for the game.

Despite the defensive effort by the Parrish the Team found it’s self down 16 – 11 at the end of the 1st quarter.  And trailed most of the second quarter until about 2 min left before halftime the Falcons took advantage of some missed layups by the Panthers and pulled out in front to lead 34-31 at half.

The falcons came out in 3rd quarter and battled to 6 point lead to start the fourth.  The Falcons then gained some significant separation thanks to two early 3 pointers by Tyreck Cosay.  They led by as much as 10 points during the 3rd and were able to hold on to win partly because of 4 points made from the free throw line by Cosay.

Tyreck went 3 for 3 from 3 point range and 6 for 6 from the charity stripe finishing with 15 points.  Upton had 16 first half points and led all scores with 19 total points.  Kellen Parrish despite drawing one of the toughest defensive assignments finished with 11 points.  Jerron Daley had 8, San Juan Slick had 7,  Shayne Stover had 4, Rackwon Cosay had 2, and Greggory Dazen had a free throw.

The falcons won the game 67 -61 and will advance to play the winner of the #4 Rancho Salano Prep vs #1 Pima game at 5:00 pm at the Prescott Valley Events Center for the 2A State title.  Live audio coverage of the game is available at iTalk 106.7 FM and streaming audio can be found at iTalk1067.com