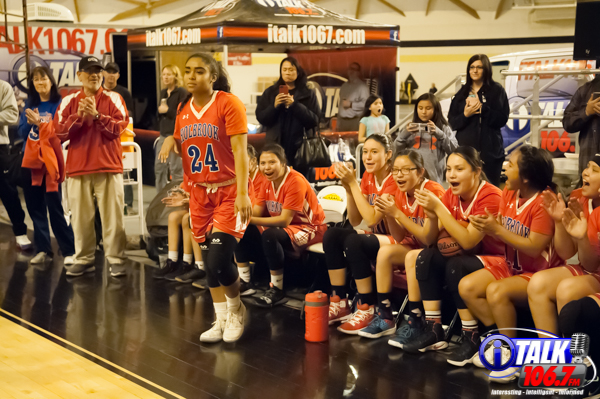 #24 Madison Chappell takes home all tournament honors as her team wins the 2018 Round Valley Roundball Shootout.

The #12 Lady Lobos of Snowflake High School travel to Holbrook to take on the # 13 Lady Roadrunners. Watch the game by clicking the image below: Continue scrolling for the boys game.

The Roadrunners are in sole possession of 1st place in the 3A East Region with a 7-0 Record, They are coming off a 52-34 region win over rival Winslow. This is the second time they have beat the Bulldogs this year. The Lobos are tied for second place with the Bulldogs and have lossed once to the Roadrunners. Despite this they are ranked a step ahead of the Lady Roadrunners due to a difference of one less loss than the Roadrunners. Snowflake is 11-4 over all and Holbrook is 11-5 overall. A win tonight for the Lady Lobos would put them in sole possession of 2nd place in the region and they would have to hope for a rare misstep by Holbrook to get a chance at a region title. Holbrook finishes their season on the road at Blue Ridge and then Show Low. Two teams Holbrook dominated the first time they played this year.

The #7 Snowflake Lobos travel to Holbrook to take on the #9 Roadrunners. Click the image below to watch the Boys game:

Snowflake and Holbrook are in a 4 way tie with Blue Ridge and Winslow for the 3A East Region title and an automatic bid to the State Play-offs. All 4 teams play tonight guaranteeing a change in the standings. Presumably there will only be 2 teams left in 1st place after the games tonight. If Snowflake wins tonight they would have a tiebreaker advantage over the other team left standing as they will have a 10-4 conference record (the best in the East).